A World War II jeep has risen from the ashes of Black Saturday to stand as a tribute to the Royal Australian Army Medical Corps (RAAMC) and to the former School of Army Health, Healesville.
The journey of the Willys Jeep from the manufacture in America in 1942 to its new home at Healesville RSL was revealed during a dedication ceremony on Saturday, 9 September.
Along with the story of the jeep, the history of the School of Army Health which was located at Summerleigh Lodge in Albert Road from 1951 to 1986, was detailed by RAAMC Association Victoria president Paul Terawskij.
Former members of the RAAMC and family members gathered for the dedication, joined by representatives of federal, state and local government, RSL Victoria, Healesville RSL, the Victorian Men’s Shed Association, Badger Creek Men’s Shed, Badger Creek CFA, Healesville Rotary Club and the Victorian Military Vehicle Corps.
Healesville RSL Commemorations officer Bob Gannaway gave a brief history of the project, saying the RSL purchased the jeep which had been burnt out at Kinglake in the 2009 bushfires with the aim of restoring it as a static display.
After service with the RAAF during the war, the Willys Jeep was sold around the late 1950s to early 1960s and converted to right-hand drive for road use.
It was later sold to a museum and stored at Kinglake awaiting restoration when the fires came through.
The chassis was restored by Healesville Rotary Club in 2012 as part of the Car Torque program, but put on hold when the program ceased in 2013.
Enter Badger Creek and District Men’s Shed. In 2016, Rotary donated the dismantled jeep and tools, to the shed where some of the members, led by Peter Broman set about a full restoration.
It was a labour of love for the team which included Peter Froud, Ron Closter, John Larsen and John Thompson.
The six-month restoration maintained the character and history of the jeep by leaving many of its battle scars and a patch of the original green colour visible on the fire wall.
The addition of Red Cross ambulance decals pays tribute to the RAAMC and Healesville’s military history as home to the School of Army Health, Healesville.
Mr Terawskij said after WWII it was recognised that there was a need to establish a Corps School in a new location to provide co-ordinated health service training for the regular and reserve components of the army.
“The location needed to be a suitable, healthy and attractive site, which could provide adequate training facilities and basic accommodation as well as access to suitable training areas,” he explained.
Summerleigh Lodge, a large 1920s guest house was chosen for all those reasons and handed over on 1 December, 1951. In 1983, the School of Army Health was officially named Norris Barracks in honour of Major General Sir Frank Kingsley Norris.
“The School of Army Health, during its 35-year presence in Healesville, established and maintained an excellent relationship with the people of Healesville and surrounding areas,” Mr Terawskij said.
He said that relationship continued with ex RAAMC personnel still residing in the district.
“We still treat Healesville as the home of the Corps as there are literally hundreds of personnel that at some point of their career, either served at the school or attended training there,” he said.
“There are many fond memories of the area.
“Thank you to the people of Healesville.”
Healeville RSL president, Brian Luscombe, is one of those former RAAMC personnel, and together with Mr Terawskij he had the honour of unveiling a plaque, detailing the history of both the symbolic jeep and the School of Army Health, Healesville. 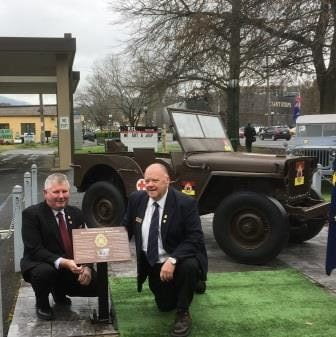